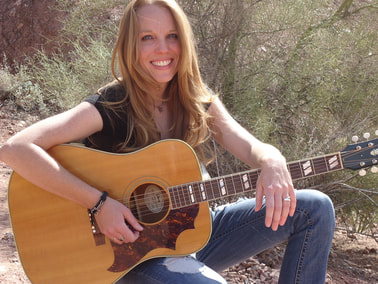 Meagan Gipson is a fifth generation Arizonan with an extensive musical background spanning more than twenty years. Meagan writes all original material, plays guitar and sings. Her style has been greatly inspired and influenced by Sheryl Crow; it reflects elements similar to those of Stevie Nicks, Chris Isaak, Melissa Etheridge and Keith Whitley as well. Her writing settles in on universal truths and focuses on topics of strength, independence, longing, and of course, that age old standard…love.

Meagan has performed around the Valley of the Sun for  over fifteen years at local coffeehouses, clubs, restaurants and events including Famous Sam’s Bar & Grill, Coffee Plantation and Pier 54. She has also played in benefit concerts at Valle Luna restaurant and Fatso’s Pizzeria and opened for the band Betty, known for their songs and appearances on HBO's series "Encyclopedia" and Showtime's The L Word at a cancer benefit at Alice Cooper’sTown. Meagan had performed at awareness events for her alma mater, Arizona State University, including Take Back the Night and Women of Juarez and special events with former Channel 3 news anchor, Mike Chamberlin.

Highlights include a pre-Fleetwood Mac concert performance in the Platinum Club at Talking Stick Resort Arena for the $1000 benefactors hosted by the Arizona Heart Institute Foundation. Several years later, the AHIF hosted a Stevie Nicks benefit show at Comerica Theatre where she was invited back to perform pre-concert for all guests. She played at the AHIF benefit golf tournament and Meagan was also the select guest performer at the private dedication ceremony for the addition of the Cardiovascular Research and Education Building to the grounds of the Arizona Heart Hospital Campus in which Stevie Nicks was Guest of Honor.

Meagan has been a longtime supporter of causes and active in the community from volunteering and donating to local animal rescues and shelters including Wildhorse Ranch Rescue, Forever Loved Pet Sanctuary, Maricopa County Animal Care and Control, HavasuPups and Humane Society of the United States. Her efforts also include organizing and directing music-driven benefits and teaming with organizations and foundations here in the Valley to play a part. An animal rights advocate, she also actively engages her following in animal rescue, fostering and adoption efforts.

Meagan grew up in the family sign business, an entrepreneur at an early age, she designed and sold custom kids' jewelry. She continued working in the business through high school and college, becoming a lead graphic designer and taking the role as manager for the last fifteen years. Having a background in social work with a degree from Arizona State University, she took on a second position to support the development of her latest business venture. Meagan was employed by juvenile law attorneys for three years and visited and worked with children in foster care, evaluating cases and potential adoptive placements.

Most recently, the Arizona native launched Grand Canyon Project™ inside of which she has put together a multi-sensory, music-driven performance series based on her rich and extensive family history rooted at the Grand Canyon. Her great-great-grandparents played primary roles in the creation of early tourism at the Grand Canyon as well as being writers and musicians themselves. She introduced GCP, performing at the Sunnyslope Historical Society in Phoenix, Arizona. Meagan and her mom, Debbie Gipson, have since adapted the show, transforming the stage into a turn-of-the-century western world, where Debbie reads passages from her book Stories the Canyon Keeps, introducing you to life at the Canyon, while Meagan engages the audience with songs from her album 100 Years Away, that coincide with elements in the book.

The mother-daughter duo, have teamed up to create a product line for Grand Canyon Project™ that embraces the family's legacy and shares the beauty of the Canyon and the great history of the Wild West in Arizona. Meagan's ancestors' lives and Arizona’s past are brought to life through a sensory-saturated, musical and literary journey.

Meagan also hosts two segments on TV's Arizona Daily Mix, a vegetarian and vegan lifestyles segment, "Veg Out With Meagan" and an animal rescue segment, "Dog Dish". She shares recipes on air, cooking different dishes and showcases animals up for adoption, talking a variety of pet owner topics. Meagan recently developed a product called BREAK N SAVE™ that helps save the lives of pets and people and is available to the public.

Meagan has designed and built four websites, all of which coincide with her business ventures, subsidiary companies and other entertainment industry endeavors. She continues to write and perform, residing in Phoenix, Arizona. The live performance show is available anywhere, to bring the old Wild West to you! For upcoming opportunities to travel the passageway back in time, with Meagan and Debbie, please visit the Storytelling Soirees tab. Reach Meagan and Debbie by visiting our Contact tab.